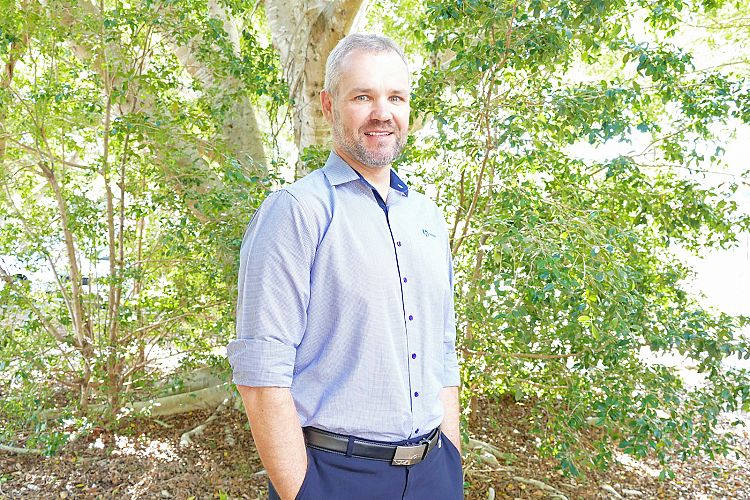 There is a quiet intensity, and an air of discipline that surrounds Tony Rossiter – and despite him having an ACL injury from recent marathon preparations and it being early in the morning, one gets the impression that he’s already accomplished a great deal today, and that he is supremely focused and three steps ahead of whatever I might say.

Starting from the beginning however, Tony was born and grew up in Canberra, attending boarding school in Armidale in the New England region of NSW from a young age. A change of circumstances when he was in grade 11 led to a move to Robina on the Gold Coast where he attended Tweed Heads High School so as to remain in the NSW schooling system.

On leaving school Tony says he found the idea of a degree in commerce appealing, and as he still had strong family ties in Canberra he returned to the capital city, choosing Canberra University to complete a Batchelor of Commerce and Accounting. During his final year, Tony was offered a position with local second tier firm Duesbury’s – which later merged with Deloittes – and he credits his subsequent 20-year career as a Chartered Accountant, to the sound foundation and training he received at the outset.

In 2001, weary of the weather in Canberra, and in search of a better lifestyle, Tony relocated his young family to Noosa. He is quick to admit however, that he didn’t realise how difficult it might be to find suitable work in the developing region.

“I still remember getting the phone book out and calling every company I thought might be a prospective employer,’ says Tony. “Unlike the capital however, most accounting firms were sole operators and there wasn’t a lot of opportunity for a senior accountant at that time.

Tony finally secured a position in Nambour which meant a daily commute but it was just this aspect that was instrumental in putting him where he is today.

“The long drive to Nambour took me past the doors of Holman and Co. on a daily basis and every day I would look at the offices and wish I was arriving at work instead of driving by,” adds Tony.

“Then, after a particularly tiring day, I just stopped on the off chance and asked to see the principal. Fortuitously, Greg Holman, was considering expanding. Tony joined the firm and has never looked back.

In 2004, Tony got the opportunity to become a partner and the company continued to grow, experiencing significant growth during a period when Robyn Clements, an experienced BDM, worked with them. Robyn was well-versed in marketing and taught Tony a lot about the importance of strategic alliances and presentations and it wasn’t long before the company was expanding into Brisbane and the Gold Coast.

Holmans deliberately aligned themselves with ARAMA – and became the financial controller to the peak industry body when it transitioned from QRama to the national association, and to this day Tony is an integral part of the organisation’s annual roadshow and member events. Holmans also offer ‘no cost/no obligation’ phone advice to ARAMA members for the betterment of the industry.

“We have, over the years, become specialists in the areas of health and medical and management rights and accommodation and tourism industry, and it feels good to give back to operators,” says Tony.

“Making inroads into the accom sector wasn’t that easy however. There was, and still is, quite a barrier to entry – it takes years to win the confidence of the industry,” says Tony. “As with every one of our clients, I needed to demonstrate a commitment to the sector; showing up at industry events, learning about and understanding the challenges they were facing and networking regularly with the inner circle of industry experts.

“It took two to three years before I felt like I was gaining traction, but then there was this snowball effect. If you win a client, and look after them, do the hard work, understand the industry and their specific business; if you produce results and help to increase their value, then clients are likely to refer you. A referral is the best compliment one can get.”

By 2008, Holmans had outgrown the original premises and the firm moved to Noosa Junction.

Greg Holman retired in 2014 and two of the long-term managers – Wayne Staal and Sharee Webster, became partners, infusing the business with new energy and ideas.

The practice has continued to grow organically and in October 2016 Lel Parnis joined Holmans as a senior accountant and team manager and moved quickly to partnership in November of 2019.

Now with a team of highly qualified specialists and advisors, their clients have access to a wealth of knowledge to help them make the best decisions for their circumstances – for now and the long-term future.

With two modern Sunshine Coast offices at Noosa and Maroochydore, Holmans have now expanded into satellite offices located in Brisbane and the Gold Coast.

As one of the leading service providers to the accom sector, and on the coal face of the financial machinations affecting many businesses over the past 12 months, I ask Tony what his predictions are for the industry.

“Management rights is based upon a sound business model,” says Tony. “Operations are quite strong and have been for some time. Long-term properties are generally consistent and short-term properties have achieved solid growth year on year – particularly on the Sunshine Coast.

“In terms of development and growth, I’m very positive over the medium to long-term. The traditional challenges – such as gallery vie and the Royal Commission into Banking are well and truly behind us – and we are now facing others; catastrophic bushfires and coronavirus will no doubt impact the tourism market in the short term. However the industry is resilient and will recover in time.

New financial policies and requirements that change constantly will also continue to influence the transaction of management rights. “It’s harder now to get finance  – harder but not impossible – and clients need to accept that financial institutions need additional time to meet their requirements.

“In saying that, none of this has stopped the liquidity of the market,” says Tony, “There is still very little risk for prospective operators, everything is just taking that much longer.”

Tony remains optimistic about the future of the industry. From an economic perspective he highlights the fact that we currently have very low interest rates (with no foreseeable end of those in sight), a recovery of the property markets in Brisbane, Sydney and Melbourne and, despite the current tourism scare, a low exchange rate so that it’s inexpensive for inbound tourism.

“Having a little more disposable income makes people feel confident about travelling and taking that holiday – the focus in the short-term will be for owners and operators to redirect their efforts and marketing at local markets so they are not dependent on international tourism.

“Every client is unique for me,” adds Tony. “Their particular background and story provides the basis for my advice and services. For me, each relationship is personalised to ensure that we meet their aspirations and outcomes and that from the very beginning I can help them make educated and informed choices.”