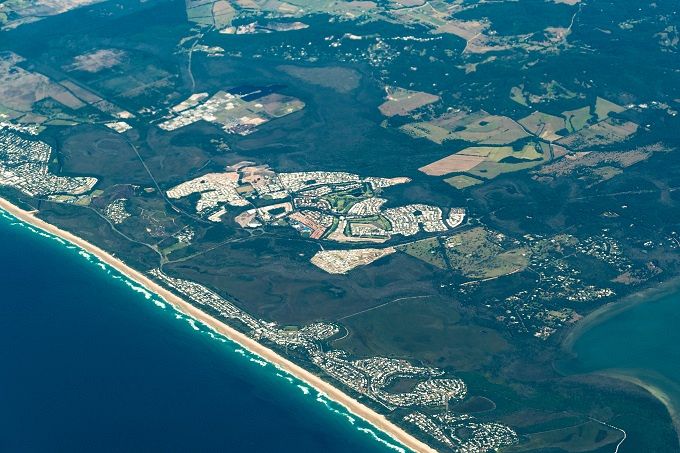 Resort Brokers’ Glenn Millar told Resort News: “We have seen a resurgence in off-the-plan projects emerging after a somewhat long hiatus, with our team recently listing three new off-the-plan offerings. These projects, with the exception of the Aria Breeze development in Mooloolaba, have predominately been residential in nature.

“We are now seeing developers looking for sites to build new holiday complexes, however these sites are hard to come by. We are in negotiations with several large developers planning significant resort developments should relevant approvals be granted.”

Millar adds: “With the major developments underway including the airport extension and the new Maroochydore town centre we believe the Sunshine Coast market will grow exponentially and new builds will be critical to meet future demand.”

CBRE’s Chris Novak is confident of the coast’s outlook: “The near and long-term future is very bright for the Sunshine Coast as the tourist numbers will keep increasing from both domestic and particularly international tourism.  The coast with its endless white beaches, perfect all-year round weather and pristine environment and increasingly sophisticated offering, will attract many travellers from China, India and Indonesia, whose middle class is rapidly expanding.

“International travellers who come to Australia for the second and third time want a different experience and the Sunshine Coast has much to offer them.  Some of the market segments that will grow are: medical tourism, sporting events, self-drive holidays, special interest, education and festivals,” Novak says.

He adds: “The market on the Sunshine Coast must be near or at the top of the current cycle owing to the increase in tourist numbers but also in increase in corporate travel, which then is reflected in higher revenue, profit and multiplier.

“Although, most of the increase has come from the domestic market due to weaker Australian dollar, increased flights from Sydney and Melbourne and from international markets in both Europe and Asia are contributing to the growth.  Sunshine Coast Tourism and council have a proactive and tourist friendly policy, which assists in growing all market segments. This, coupled with increased infrastructure spending, is making the whole Sunshine Coast an established destination with a strong offering.”

Buyer interest remains high. Novak told Resort News: “There has been strong interest in quality accommodation assets by both domestic and international private and institutional buyers.

“Many large foreign investors have entered the Australian market progressively by buying initially small and then increasingly larger stakes culminating in taking controlling interest in such iconic home-brands as Quest and Toga by Singaporean investment funds and Prince Hotel Group in Japan. PHG is, in turn, owned by the Seibu Group that recently acquired StayWell Hotel Group,” Novak says.

“With individual asset purchases, Asian buyers prefer well-located hotels in capital cities and, in particular, Sydney and Melbourne.  These are often multi-generational purchases, hence Asian buyers are prepared to acquire them at the top of the cycle rather than for counter-cyclical reasons. Although, the Chinese government clampdown may affect individual unit buyers, it is not the case with large hotel investors.

“Unlike in the past, Chinese buyers are shying away from management rights businesses due to their hands-on nature, and the human factor of dealing with a body corporate and individual investors,” Novak told Resort News.

Millar insists: “Chinese buyers are not really attracted to the Sunshine Coast unless it’s for permanent complexes. Even then there is no real support structure on the coast favoured by Chinese buyers. In the last 12 months, we have sold one rights to a Taiwanese family and one to Chinese buyers.

“We are getting solid interest from both interstate and New Zealand, and from local buyers. Our major source of buyers however is still out of the southern states,” Millar says.

Phippsfin’s Phipps agrees: “Chinese demand not really an issue as we don’t see much transaction activity for Chinese buyers on the coast. Buyers are still coming from New Zealand with Sunshine Coast lifestyle and weather as an attraction.”

Stoll emphasises: “The management rights industry in Queensland will see a decline in Chinese investment for a short-term period. A Chinese buyer recently advised that they only have the ability to withdraw $US50,000 per person per year; if a family of four then $US 200,000 per year can be withdrawn.

“The [reduced] Chinese investment into management rights will slow down the demand. We are currently experiencing managers holding onto their complexes for a number of reasons, such as the Commonwealth Games approaching, so management rights investment options are limited,” Stoll maintains.

“The last 12 months has seen buyers coning from Victoria, NSW and WA but there is still international interest from the United Kingdom and New Zealand,” says Stoll.

PBB Consult’s Brewer agrees: “The Sunshine Coast to date has not seen large scale strata Chinese investment. Property generally has achieved strong growth off the back of buoyant property markets in the southern states and Brisbane together with population growth from interstate migration.”

Phipps told Resort News: “Multipliers following Gold Coast trend with well-located high net profit resorts pushing the six times mark. But agents report limited stock as operators have either sold or are staying put and enjoying the good times. The average length of ownership for resident managers is getting longer as a result.”

“The multipliers for quality higher netting businesses are holding up and will continue to do so while demand exceeds supply,” agrees Millar.

“The Gallery Vie issue is still of major focus for most of the lenders; however, we haven’t had a sale not proceed because of this yet,” Millar told Resort News. “Many resident managers are talking the opportunity to become Gallery Vie-compliant at their AGMs.

“The finance approval period in contracts is becoming stretched from the long-accepted 30 days to in many cases 40 – 45 days and longer. We are ensuring all parties are aware of this during negotiation and contract stages,” cautions Millar.

Novak insists: “Obtaining finance is increasingly difficult due to APRA raising requirements on all major banks to raise liquidity and tighten loan conditions, which has then the flow-on effect to borrowers. However, management rights are considered by the banks an ‘asset class’ on its own as it has grown in sophistication and has attracted more professional owners and managers. This sector has also attracted management rights syndicates, partnerships and institutions that often own multiple complexes. It is seldom that management rights businesses become insolvent and are foreclosed.”

Novak adds: “Furthermore, management rights are a flexible asset that allows for increasing short- or long-term letting, and thus withstand the vagaries of the market place. With this in mind, in the current economic climate, banks lend money easily to management rights operators, provided that the loan is for a larger complex and unit pool and that it is more of a business rather than a lifestyle where the operator does not have to work part-time.

“The banks’ benchmark for loans is in access of one million for MLR businesses,” Novak told Resort News.

Brewer concurs: “Whilst funding remains competitive, the attitude of lenders seems to be changing with RBA compliance requirements starting to bite. We ultimately see this as a positive for the industry as it will help ensure lending practices remain in line with borrowers’ profiles.”

Stoll asserts: “The multiplier on the Sunshine Coast in the last couple of years has increased to the levels pre-GFC with mid to upper fives for larger net incomes. The industry may see some movement in the multiplier with the demand from the Chinese slowing down and managers holding on to their current business.

“The Sunshine Coast does not really have a direct effect on Chinese investors at present, as they prefer to invest into buildings on the Gold Coast and Brisbane,” adds Stoll.

“Recently there has been a shift in the financing industry with banks tightening up on their lending with  more stringent criteria for buyers to meet. This has specifically affected the management rights with a standard module for the caretaking and letting agreements which is a maximum 10 years. The major banks are now requiring as their criteria experienced managers and repayments based on principle and interest,” Stoll told Resort News.

As to the future, Stoll believes, “Management rights is still one of the best returning businesses currently available to people wanting to enter the industry. We receive a lot of feedback from the managers in management rights and one of their key concerns is with the legislative changes with the lot owner’s termination notice period being reduced from 90 days to 30 days. What really affects the managers capital investment is owner occupiers. This maybe a contributing factor as a result of reduced contract notice period and interest rates could also be a causative factor,” says Stoll.

“In relation to the next five years we at Think Management Rights believe there will be a large number of management rights come to the market after the Commonwealth Games in 2018. Management rights sales will remain strong in the current economic climate,” Stoll stresses.

The outlook for the Sunshine Coast looks so positive for the next five years but there does need to be some very real action on the transport and access front. Road and rail infrastructure is just not adequate for the snowballing progress while future transport plans seem to be mired in bureaucratic red tape and games of financial ping-pong.