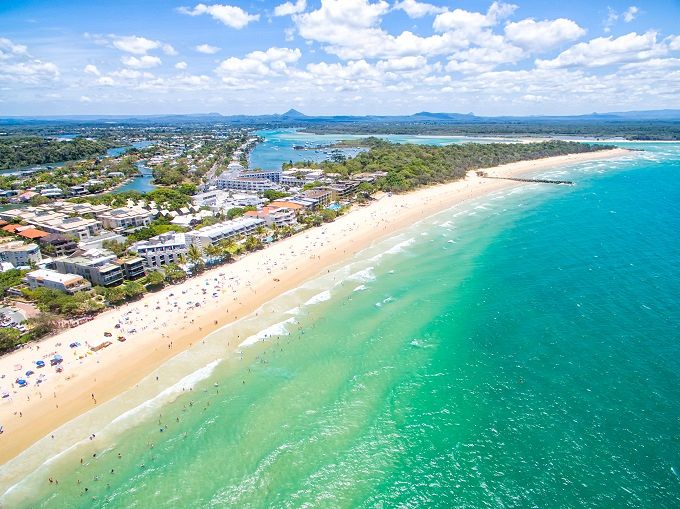 Sunshine Coast spotlight: dynamic growth that is sustainable PART ONE

In October 2016, we predicted in our annual Spotlight on the Sunshine Coast that the property market was on the cusp of massive growth and that growth would be sustainable. That has proven fairly spot-on.

Management rights appear to be powering on, despite a definite lack of quality listings coming onto the market.

Director of Phippsfin P/L Mike Phipps sums it up: “The Sunshine Coast is enjoying fourth year of strong demand growth.”

“There has been strong growth in sales activity since 2015 and this has only improved with established properties in 2016 and 2017 experiencing solid sales throughout most of the Sunshine Coast,” affirmed Chris Novak, management rights and motel broker with CBRE Hotels. But he qualifies that: “There has been acute shortage of quality management rights and quality properties are snapped very quickly; especially with net income over $500,000.”

Glenn Millar of Resort Brokers agrees. “We had a record year in 2016/17 and already in the 2017/18 financial year we have a number of management rights under contract. I expect this year to be exceptional, despite the lack of quality listings coming on the market.

“Demand seems to be focused on businesses netting in excess of $300,000; however, smaller properties with long agreements that are priced well are starting to gain traction.”

Wayne Stoll of Think Management Rights is a little more cautious: “Management rights sales have been a little slow in the last six months - the enquiry level has been below normal for properties in the high $1 to $2 million bracket. Also, it is a challenge at present getting good properties to list for sale.

“There has been a lot more demand for management right businesses with high net profits (around $500K+), which attracts partnership consortium investors,” Stoll told Resort News.

Peter Brewer, director of business advisors PBB Consult, told Resort News: “Tourism and the short stay accommodation market on the Sunshine Coast has remained consistently strong through-out the last financial year. While there are three distinct geographic markets, all locations have performed well over a prolonged period (and probably the best two to three-year short stay accommodation trading period we have seen in the 25 years I have been on the coast). I believe this is due to a combination of micro and macro factors with ultimately the Sunshine Coast maturing in terms of its offering to visitors.

“As a consequence of solid trading, population migration and the Sunshine Coast being a desirable place to live, we are seeing continued growth in multiples particularly with those management rights businesses with net profits greater than $300K. In terms of moving forward, while I don’t see any major roadblocks ahead, investors need to be conscious of broader issues impacting maintainability of net profits. In the medium term, the redevelopment of the Sunshine Coast airport should be a major boon for the area.”

Tourism continues to be one of the area’s greatest assets.

The Sunshine Coast attracted some 296,000 visitors to the Sunshine Coast that contributed almost $250 million in visitor spending to the economy in the year to June 2017. The coast experienced 11.6 percent growth in international visitors against a backdrop of a state-wide increase of 5.6 percent and a national increase of 8.7 percent.

New Zealanders remain the Sunshine Coast’s biggest source of international visitors, growing over 12 percent to a total of 71,000. The region also attracted 58,000 visitors from the UK, 36,000 from Germany and 19,000 visited from the US. Asian arrivals totalled 21,000 while the region attracted 15,000 visitors from Scandinavia – increasing by 38.5 percent and 13,000 from Canada up by over 20 percent.

This consistent growth has been a result of the Sunshine Coast’s collective marketing campaigns from Sunshine Coast Council, Tourism and Events Queensland and working with airline partners like Air New Zealand (hence the New Zealand growth). The Sunshine Coast has a whole bunch of initiatives and promotions going; partnering with companies like TEQ, Singapore Airlines and Australia’s Nature Coast partners. Flight Centre Australia also ran a campaign promoting the region during July and August, which will no doubt bring in even more visitors from all over the globe.

Sunshine Coast Airport, one of the busiest council-operated airports in Australia with almost one million passenger movements in the 2015/16 financial year, is undergoing a major restructuring to cope with future growth.

The new runway project, anticipated to be open for operations late in 2020, will deliver new facilities to meet current and future demand for greater direct flight access from destinations across Australia, New Zealand, Asia and the western Pacific. The airport expansion project will create jobs, generate economic growth, boost tourism to the region and assist export businesses.

From last month, independent specialist infrastructure manager Palisade Investment Partners became the Sunshine Coast Airport’s commercial operating partner under a 99-year lease. Palisade will be responsible for operating, investing and developing the airport and will oversee future negotiations with airlines to expand both domestic and international routes available from the Sunshine Coast.

Palisade would make lease payments totalling $82 million of which $67 million was to be paid when they took control of the airport’s management, staff and non-land assets. Palisade has agreed to a further amount of $290 million to be paid for the construction of the new runway in 2022.

Council will retain a financial interest in the operation of the Sunshine Coast Airport by way of an annual rental payment of five percent of gross revenue, conservatively equating to about $205 million over the 99-year life of the lease starting in 2017/18.

Palisade will also take responsibility for future terminal development, thereby reducing the projected cost to council of the airport expansion project by $28 million. These four amounts see the total value of the deal worth an estimated $605 million to council.

Tourism development on the Sunshine Coast has seen a dramatic upsurge with two major projects centred on the Yaroomba Beach area.

Headlining tourist development is the $1 billion Sekisui House development at Coolum. This much needed project to offset the disastrous Palmer Coolum Resort fiasco, has been plagued by minority opposition and inept council policy since the Japanese real estate giant Sekisui House bought the land from LendLease in 2010. Earlier plans for a much bigger development, including a 450-room luxury hotel, were opposed by parts of the community forcing a rethink.

The new 220-room Westin Coolum Resort & Spa will be the centrepiece of a mixed-use development comprising apartments, shops and restaurants on a 20ha site overlooking Yaroomba Beach. The Westin will be the first new luxury hotel built on the Sunshine Coast in 27 years. Apart from guest accommodation, the resort will offer four dining venues, a spa with six treatment rooms, 850m² of conference and event space and direct access to the beach.

Earthworks has started on Marcoola's multi-million-dollar new development The Shore. Falcon Projects director Damon Falcongreen confirmed the Sunshine Coast Council had approved the development on a 5.5ha site with 1.2km of frontage to Marcoola Beach next to Surfair Resort on the David Low Way.

The first new luxury resort accommodation in Mooloolaba on Queensland’s Sunshine Coast in over a decade opened in early 2017 and is managed by Choice Hotels as an Ascend Hotel Collection member.

Breeze occupies a prime position on The Esplanade, overlooking Mooloolaba’s north facing beach and offering some of the safest and best swimming conditions on the Sunshine Coast.

Developed by the Aria Property Group, the building incorporates 57 apartments over 10 levels with pool, spa and recreational area designed by Tony Owen Partners.

Altitude on Montville, built on the northern entrance to Montville village, at the end of 2016 as a boutique hotel of 23 apartments over two levels is well positioned to capture the magnificent views of the Sunshine Coast. Built by the Purcell family who created the very successful Montville Café Bar and Grill in 2008, the Tim Ditchfield-designed hotel is destined to become a highly desired wedding and event venue on the range.

In August, co-owners Brad Rankin and Peter Kendall launched a master plan for the Big Pineapple site with the Sunshine Coast Council. The proposal includes plans to build an Agribusiness Centre and a food and tourism hub that will include a water park, winery and zip-line course on the 1971 icon’s 169ha site, just off the Bruce Highway at Woombye.

All this ongoing development has led to exceptional confidence in the coast’s future.

Stoll of Think Management Rights told Resort News: “The management rights return on investment is very lucrative in the current economic climate for holiday complexes on the Sunshine Coast regions, especially compared with Brisbane that has been impacted by the new developments with a large number of units coming on line and a corporate decline.”