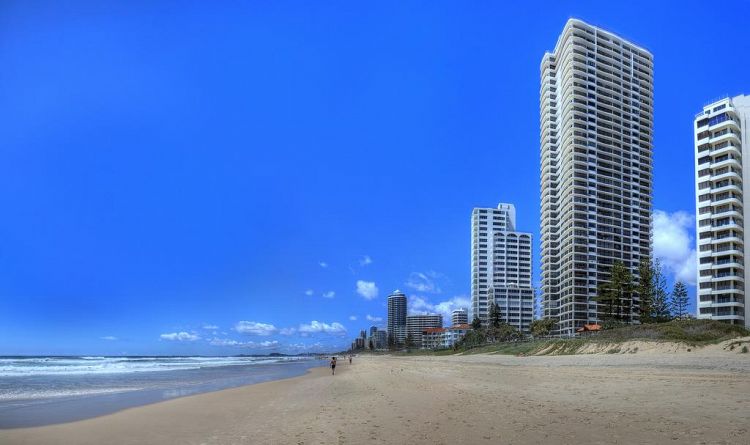 Resort News spoke with Darrick Poletto, company director at Amalgamated Property Maintenance, the company that took charge of the huge job, about what the refurbishment process was like. The company told Resort News that the design and installation systems for the balustrade, windows and doors will be a “new benchmark” in security and safety for future building refurbishments, with building standards not only met, but in most cases, exceeded.

Mr Poletto seemed very excited about the project as he described what the process had entailed.

“We have a very competent team lead by our business manager Mr Tony Beales and our body corporate liaison Ms Bev Allen. These two essential personnel are constantly in touch with body corporates and building managers to provide solutions to their varying and ever-changing needs.”

He continued: “With this project, we were notified of the refurbishment through Buildcheck Consulting Engineers, the appointed project manager. A tender document was issued and we assembled a conforming document over the required timeframe. All tenders were opened together, to ensure competitiveness and legality and then narrowed to three recommended tenderers.

Mr Poletto noted that the original vision was to “implement the wishes of the many interested parties. In such a large refurbishment project, we needed to satisfy owners, tenants, residents, building management, project managers and the body corporate, just to name a few.

“The sheer logistics alone involved in removing and replacing 1000 windows, 5500m2 of tiles, installing 2700m of new balustrade and repainting the building was astronomical. All of this had to be completed while taking into account that Surfers Aquarius is a holiday resort and home to many owners, tenants and visitors, with working facilities like tennis courts, swimming pools and private access to beaches and all these people had to be protected.”

The process in conquering this logistical project was methodically planned from the moment the team knew it had won the project. “First, we had to get the new products to each level, so we engaged an elevated working platform company to provide us with nine independent mast climbers utilising both twin and single mast machines with over 1400 pieces of mast section, making it one of the largest uses of mast climbing equipment in Australia’s history.

“Mast climbers have been around for a long time, but it is the sheer amount of equipment used for this project that has set new records. Each climber has its own platform that can be raised and lowered from the ground to the penthouse and are able to carry weights of up to 4500kg each. We wrapped the entire external perimeter of the building in mast climbers, so as to enable the 25 staff to walk right around the outside of the building, albeit, 40 stories in the air.

“We didn’t want to impact on the daily running of the resort, so by installing the climbers, we were able to complete all the works from the outside of the building, without using the internal lifts and also fully containing our rubbish and debris within the climbers. We even installed a port-a-loo, a microwave, and a sandwich maker on the climber, so that the tradesmen felt right at home. This enabled the resort to remain fully operational while the works were taking place around them. Most people didn’t even realise we were working around them, until the jackhammer started!

“Weather permitting, each unit was completed in six working days. This involved demolition on day one, with completion of all trades on day six. We progressively “corkscrew” down the building, with each trade moving to a different unit each day. We then dropped down a floor and started the whole process again.

“None of this could have been completed without support from our suppliers.

The new windows were supplied by GJames Glass from their Southport factory, meticulously delivered week-in-week-out, without fail. Thank you to Robert and Roger.

Our window installation team, comprising Scotty, Cheyne, Jason and Bazza, did an outstanding job, all led by the vastly experienced Glenn.

The balustrade was supplied and installed by Aluminium Balustrades, a local family-owned company, based right here on the Gold Coast. Thank you to Brian and his team, especially Rick and Jeff.

The demolition team had the most fun on the project. Who doesn’t love smashing things? Andy, the team leader and self- appointed 2-i-c, Cody, worked tirelessly throughout the entire project. Thank you guys.

Mr Poletto added: “We experienced a few obstacles, naturally, but the vast majority were weather-related. We invested a large amount of money in trying to ‘play god’ by installing weather covers that attach to the building and the climbers, but these were limited to enabling works during small weather events only.” However, this still enabled the team of tradesman to turn a half-day into a full day of work, which limited down-time and also protected weather-sensitive trades like waterproofing and painting.

While the project was expected to be completed within 12 months, the program ran a little over time, with the majority of delays due to bad weather.

He also noted that there have been many glowing reviews and positive comments on the refurbishment. Many residents complimented the tradesman on-site, who are “the real heroes of this story”. Mr Poletto said he was regularly told “how polite they are”, and that “they help out whenever they can”, which he believes to be the reason for the project’s smooth sailing. Mr Poletto also mentioned that “some units seemed to take forever to complete” only to find out later that a particular owner had supplied the “tradies” with coffee, biscuits, cakes, scones, etc. Funny that! He joked.

“Particular mention needs to be paid to the building managers at Surfers Aquarius. Mr Gary Hender and his wife Denise and their team, were fantastic in managing guests, liaising with our supervisors, and generally managing an enormous task with grace and dignity. We would personally like to wish Gary and Denise all the best in their retirement and welcome new managers, husband and wife team Ric and Tracey McDonald: all the very best.

“This culminated in a project that will change how building refurbishments are completed in the future. Through our many years of work in the construction industry, we have put together a very professional team of high quality, fully qualified tradesmen. We are now fully geared to take on any task, whether it be a small project or creating the ‘New Age of Aquarius’.

“Amalgamated Property Maintenance prides itself on providing superior quality projects, with fully qualified tradesmen and an open builder’s license”, they are raising the bar in the refurbishment market in south east Queensland.

“We now have offices on the Gold Coast, Brisbane and Sunshine Coast, to enable us to service the market with expertise that the Amalgamated name is renowned for. Building owners and managers can be confident Amalgamated will guide them through any refurbishment project.”

"We wrapped the entire external perimeter of the building in mast climbers, so as to enable the 25 staff to walk right around the outside of the building, albeit, 40 stories in the air

The process in conquering this logistical project was methodically planned from the mo-ment the team knew it had won the project".