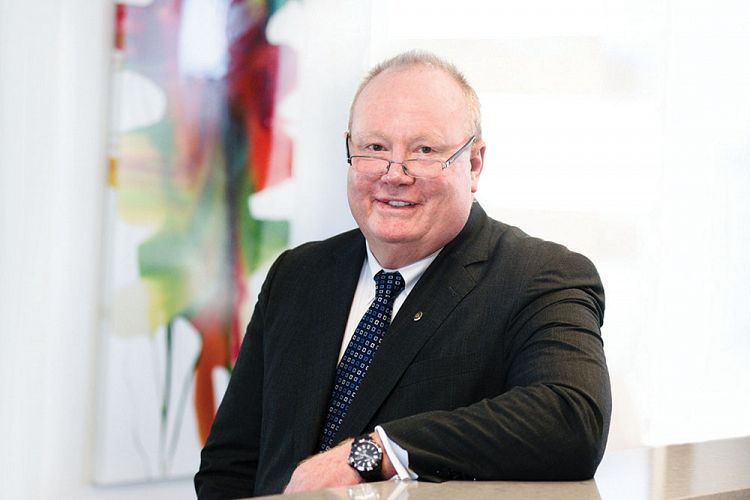 There is an air of quiet determination about Col Myers, director and partner of Gold Coast-based legal firm Small Myers Hughes – and I’m not referring to the fact that he is a highly regarded legal practitioner who has contributed significantly to the management rights industry over the past 30 years – but rather how he created this level of impact across three states and still continues to do so.

Raised in Longreach and schooled at Ipswich Grammar School, Col says he thought he was destined to be a teacher, and in fact, was even enrolled at Teachers College before realising that it really wasn’t what he wanted to pursue. He then entered the public service as a clerk in the Superannuation Department and later transferred the Justice Department to work out of the Southport Courthouse.

Observing the diversity of legal issues that he saw whilst working in the Courthouse, he remembers going home one evening and announcing to his new wife that he wanted to study law.

“I was fortunate enough to secure a position with Steindl & Company in Surfers Paradise for three years while I did my articles before transferring to join Attwood Marshall and Woodward at Coolangatta, so I could be admitted in both Queensland and NSW when I finished my five years of articles. This gave me an excellent grounding in property and commercial law in both States.

It was the late 80’s, and management rights was slowly being adopted in New South Wales. There was a lot of work available in setting up agreements for developers but that came with trying to establish how the concept would fit in with different legislation and strata laws.

As an Accredited Property Law Specialist (NSW), Col became involved in handling all aspects of management rights transactions, specialising in strata advice, attending and addressing body corporate meetings and strata dispute resolution and advising developers on the creation and sale of management rights for their developments throughout Australia.

Over the years he has handled an extensive range of property and business purchase/sale transactions ranging from vacant residential land to multimillion-dollar commercial properties, to major management rights transactions, but none more important perhaps than the work undertaken to influence legislation reform in 2003 when the NSW government decided to bring in laws dealing with caretaking agreements and (ultimately) limiting the term of new Caretaking Agreements to a maximum of 10 years.

In 2001 and 2002 there were a number of stories appearing in the press relating to significant disputes between caretaker managers and bodies corporate in NSW. The Regis Towers buildings in Sydney in particular created a lot of bad press for the management rights industry. As a result,  the government of the day called for a comprehensive review of the strata legislation with the very real possibility of limiting caretaking agreement terms to a maximum of three years.

Understanding the significant impact the reforms could have on the industry, Col became an activist, getting into his car and literally going door-to-door of every potential management rights property from Tweed to Sydney south speaking to managers, cautioning them about the impending legislation change and urging them to contact their local member and policy makers in the Office of Fair Trading. Together with other industry stakeholders, he was instrumental in appointing Bailey Compton, an established policy writer, to develop a proposal to government based on a 15-year caretaking cap (which was ultimately approved at 10 years). Many years earlier at Col’s bequest, Bailey (when working at the Office of Fair Trading) assisted the industry by creating a restricted letting licence in NSW for management rights operators.

In addition to developing a database of management rights operators that hadn’t existed before, Col’s crusade was responsible for the establishment of the early chapters of the Management Rights Association (now ARAMA) in Byron Bay, Port Macquarie, Newcastle and Sydney.

“There’s nothing quite like a crisis to get things going,” says Col, and 16 years down the line we’re needing to do it again in NSW.”

When asked about the challenges currently facing the management rights industry generally, Col says: “We’re seeing a lot more attention on legislation and the need for higher standards across the industry. There are a lot more developers of big buildings adopting the model all around Australia and it’s important to reach them early and to educate them about establishing the correct structure and ensuring they make proper disclosures to proposed unit buyers".

“For incoming operators, bodies corporate are understandably insisting on greater levels of protection – in the form of the assignment process and specialised training for new entrants, and the onus is on industry entrants to understand what they have bought and to ensure that they sufficiently equip themselves with the skills to perform those duties satisfactorily."

“And that’s not where it ends,” adds Col. “Top ups are becoming increasingly more difficult to achieve. Managers have to actively demonstrate to owners that they are getting value for money, and that the services they are paying for are being delivered. At a time when unit values have been static for a few years and investor revenue has plateaued, or even decreased, there is a scenario that’s ripe for conflict. To ensure that management rights remains relevant, and valuable from an owners’ perspective, managers need to be asking ‘how can I show the owners the benefit of having an onsite manager'. If the job is done well, in the best interest of all owners, the management rights business will continue to grow.”

“So many managers are doing an excellent job but they don’t tell anyone. They should do what they are supposed to under their caretaking agreements, ensure that they have a good record of having done the work and then ensure that the owners are updated and communicated with on a regular basis – remembering that when it comes to a “top up” vote at a general meeting, the threshold is only 51 percent."

Col has practiced exclusively as a property lawyer since his admission in 1981 and regularly travels across the country to visit developers and his clients at their complexes and his extensive expertise means he can proactively advise when and how to best handle management rights to work effectively for individual scenarios.

He is a Fellow of the Australian College of Strata Lawyers and other than those already detailed, his past accomplishments include being engaged by the Estate Agents Authority of Hong Kong to provide a summary of the NSW Property and Titling Laws as part of a worldwide review to its introduction of new property legislation.

Col is also a director and legal advisor of ARAMA National Inc, and a regular columnist on strata issues in publications such as ResortNews and Informer magazine.

"Management Rights is an industry I am passionate about,” says Col. “I highly value my relationship with my clients and other key industry professionals and feel fortunate to have been able to be involved.”

Unquestionably, Col has inspired, mentored and educated several generations of property professionals and shows no signs relinquishing his role.